Q & A with Jennifer Quintenz! 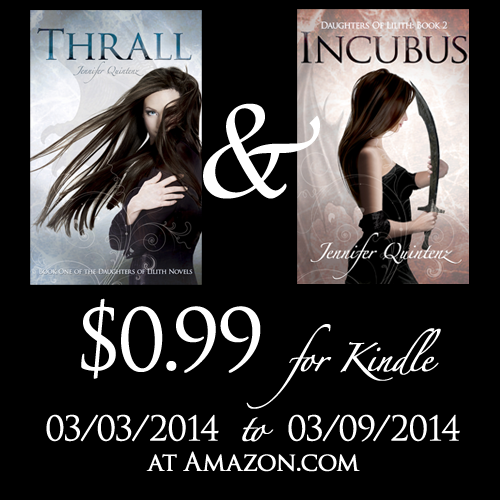 For this Q & A I interviewed Jennifer Quintenz, the author of the Daughter of Lilith series. I've read her first book Thrall and I'm excited to read the second installment Incubus.

Last month the third book in the series, Sacrifice, was released. Until 3/9/2014 there's a sale for the books Thrall and Incubus at Amazon.com. You only have a couple of days left, so check it out!


Why and when did you start writing?

I’m not sure when I started writing, exactly, but I do know that sometime between age 7 and 9 my dad made it a condition that my sister and I only got our allowance if we finished our chores AND wrote something creative.  Could be a poem, a short story, a limerick… as long as we thought it up and wrote it down (and finished our chores!), we’d get our allowance.  Some of those stories (even though I resented writing them at the time) stuck with me and grew into my first longer stories. Those “longer stories” were originally something like 24 pages or so - and I started working on those when I was maybe 11 or 12.  I’ve still got a stack of books at home from that time.  It takes up most of a filing cabinet drawer.  Thanks, dad.  :)


What inspired you to write the Daughters of Lilith series?

I love taking existing mythologies or legends and thinking about what would happen if they were true - and we were living with the consequences of those myths in present day.  The stories of Lilith - ancient, ancient stories found in a variety of cultures - are pretty interesting / freaky / compelling.  But I’ve been so leery of dealing with a character set in that mythology because the idea of the succubus has become just an over-sexualized male-fantasy.  So I wondered, what if I told the story from the perspective of a normal girl who has no idea this is in her genes… and what happens to her when she finds out what she is.


What is the hardest part of writing a book?

Ha!  I’d probably give you a different answer if you asked me this question when I was outlining, writing the first draft, or rewriting!  But I think, fundamentally, the hardest part is probably coming up with the big idea.  Once you’ve got that compelling kernel - what becomes the heart of the story - and you’ve figured out what you love about the story (because that’s what keeps you engaged when you’re slogging through the trickier parts of the process), then it’s just a matter of making sure you execute it “right.”


Can you describe a typical work day?

Sure!  I get up with my toddler, we hang out and eat breakfast and have meltdowns and play together (not necessarily in that order) and then I take him to school.  I usually get back home and go straight to work writing, take a 10-15 minute break for lunch, and continue writing until I have to go pick him up.  Sometimes I’ll go to meetings or meet up with friends or colleagues for lunch, but the typical work day is me just trying to get as much written as possible before my writing time is gone for the day.  So basically - it’s a mad dash to the finish line every day.  :)  When I’m writing a book, I try to write one chapter a day.  Then, the next day, I reread/rewrite the previous day’s chapter and write a new one.  So every day I start by tweaking the previous day’s work, which helps to both strengthen the previous pages, and gets my head back into the world of the story for the current day’s work.


What would you like to accomplish in the next 5 years?

5 years - great question! I want to finish the Daughters of Lilith series (it’s going to be 5 books total) and write the next two series I’ve got planned.  Dream goals? I’m pitching a pilot that I think would make an awesome TV show, so that would be fantastic if it got picked up.


Who is your favorite author and what is it that really strikes you about their work?

This is a hard one.  I’d say, probably my two favorite authors are Tanith Lee and Orson Scott Card.  I read Lee’s “Silver Metal Lover” and fell in love with it, her storytelling, the emotion and drama she was able to so eloquently convey… man, I don’t know what that story isn’t a movie.  It’s one of my greatest wishes to be the one who gets to adapt it for the silver screen.  And Orson Scott Card - I loved “Ender’s Game” the first time I read it (I think I was in middle school?) - and it’s one of a handful of books I return to over and over again.  There’s something so human about his characters and his world - how he captures that so skillfully, I really admire his work.


Do you have any advice for other writers?

Just - write!  Finish things.  It’s so much easier to rewrite and tweak after you’ve got a finished draft.  I often lose heart in the middle of a project, but you have to play through the pain, right?  Give yourself permission to write crap - there’ll be time to finish it later.  The important thing is to finish.


What are your current projects?

I'm working on the last two books of the Daughters series right now - but I’ve also got a very exciting project in the works that I can’t go into too much detail on right now.  Just let me say, it’s an anthology of stories contributed by some amazing TV writers and it’s for a great cause.  More details coming in the next few months!

I want to thank Jennifer for answering the questions don't forget to check out her sale while you still can!
Happy reading everyone!